Waste not, want not, as they say…

I’ve been spinning some lovely, but rather slippery, fibre recently.  It took me a little while to get to grips with it, so I’d used quite a few handfuls of it before reaching a point where I could spin it consistently. I figured that my early attempts wouldn’t make great finished yarn, so, once I was happy with what I was producing, I tied a slip knot in the singles to mark the end of the experimenting, split the remaining fibre, spun it and plied it.

This, of course, meant I had quite a lot of singles left on the first bobbin.  I knew I would need to try a few needle sizes to get the right gauge for this project, so I thought that I might as well ply what was left and use it for swatching.

I have used bracelet plying in the past, but it has usually ended up with me being on the brink of going to A&E to be cut out of the mess that was wound round my hand, having cut off circulation to my finger!

This time I opted for the high-tech, finger-preserving, “DPN poked in a book” method:

Eventually I ended up with this:

Using a book has its advantages (apart from keeping your fingers intact) – you can put this down at any point and come back to it later.  No more odd looks from the postie as you struggle to open the door…

When I’d wound on all the singles, I set the wheel up, put the start and end of the singles together and tied them to the leader.  I then gently slid the DPN up and out of the book:

I then poked the DPN between the singles and the front cover to hold the space that my hand would go through.

I edged the bracelet off the book:

Then pushed my hand through the loop:

I fiddled about with the two singles until they fed onto the bobbin without catching themselves up in the rest of the bracelet:

And I was away!

I wish that I could show you a huge skein of neatly plied yarn to encourage you to try this for yourself.  It was all going so well… I did manage to get a fair amount of extra yarn this way, but I also let my attention wander somewhat and ended up with this: 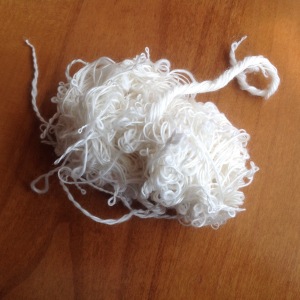 Maybe a smaller/tighter bracelet would have helped?  Or maybe concentrating more…!