How many plies does a girl need?

It’s almost a year since I started spinning on a wheel.  I’ve been stocking up on bobbins and whorls as the membership discount that I purchased when I bought the wheel runs out pretty soon.  I’ve now got 5 standard bobbins and 4 high speed ones, which should be enough to keep me going for a long while.  At around £30 per bobbin that’s a lot of money on bobbins – one of the (few) downsides of a Ladybug wheel.

I decided to put the bobbins to good use and try a 4-ply yarn.  I had 100g of grey cheviot which I had already made a start on – I was impatiently trying out double drive and waiting for the high speed bobbins, so started on a standard bobbin, then put it to one side when the exciting new shiny high speed bobbins came along.  Fickle, me???

So, there was about 35g on the existing bobbin so I split the remaining fibre into roughly even sections and spun three more bobbins worth. So far, so good!  I went and fiddled with the inbuilt lazy kate, adjusting everything so all the bobbins sat nicely and the tension bands went where they should.  I think I overdid it as it was hanging onto the yarn a bit too much whilst plying, so I’ll have to go and tweak it again. 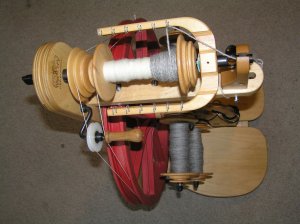 Plying four singles at once was interesting…  I tend to ply using a whorl which is a couple of sizes larger than the one I used for spinning the single, but even this resulted in a somewhat overplied finished yarn.  I think it was a combination of trying to keep four singles under control, them all fighting the lazy kate and me treadling like a demon.  Although it wasn’t perfect it did make a lovely round yarn.  Of course I ended up with three bobbins with varying amounts of singles on them, so made some more 2 ply to use it all up.  I have a picture in my mind of a hat I’ve seen somewhere with a seed stitch brim, then plain stocking stitch and a knitted flower on it.  Despite looking in many place I can’t find it online, so maybe someone wore it in a TV programme.  If the yarn isn’t too wire-like it may turn into something like that.

I want to try this again though – I have a vision of a lovely fat squooshy yarn which I could make into a great big wrappy round scarf.