The new edition of Knit Now magazine (issue 54) is published today and includes my latest patterns – Sebright hat and mittens: 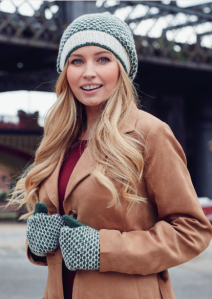 It was a relief to see the finished hat being worn by someone – everyone in our house has a particularly large head, so there was no-one who could try on the required sample size!  It was artfully modelled over a few bowls and inflated balloons, but that’s not quite the same as a real live person…

This set uses the broken seed stitch, which creates a really interesting textured pattern, but is very simple to create – a row of knit stitches in one colour and then a row of alternating knit and purl stitches.

Persuading the stitch pattern to decrease for the crown/top of the mittens in a consistent way was a challenge, but I was pleased with the finished effect:

Pattern naming also proved to be a challenge.

Originally these patterns had a name that was inspired by the similarity of the stitch pattern to the “laced” feathers on a Wyandotte chicken.  If you need to know more about these chickens, there’s a detailed history here.

Now, how many other people would name patterns after chickens?  Surely not many?  But by some strange coincidence another designer for Knit Now had already used the name Wyandotte – and for a hat and mitten set too.  So, back to the drawing board…

Consulting my book of fancy chicken markings (I’m sure you have a copy on your bookshelf…) I found that the Wyandotte was developed by breeding Sebright bantams with larger birds to obtain the markings in a full sized bird.  So Sebright it is!

This entry was posted in Knitting, Patterns and tagged hat, Knitting Pattern, mittens. Bookmark the permalink.