You may have already come across the Little Yellow Duck project – I have finally found the time to get involved after intending to do so for many months.

I am a sucker for things like this – I love the idea of leaving anonymous surprises and this project has the bonus of raising awareness for a very good cause (blood and organ donation – possibly the ultimate random act of kindness).

Despite all being made from the same pattern (Lil’Ducks) each duck seems to develop its own personality. So far I have ‘released’ half a dozen ducks into the wild:

Sunshine Suzie made her debut on a zipline at the park:

Pamela of Pagham went birdwatching at the nature reserve (I think a chap from the Environment Agency found her and then put her back for someone else to take home as she was ‘found’ twice!): 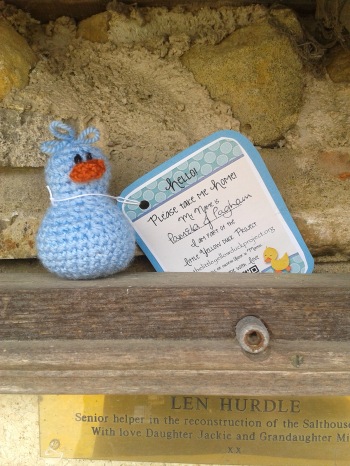 Richard of Aldwick hung out at the Post Office:

Three ducks went to visit Bognor Pier on its 150th birthday – Dulux had donated some pink paint to the Pier Point Project (try saying that after a few drinks…) so they had names inspired by the Dulux pink paint shades – Pinkie, Candy and Sweetie:

It doesn’t end there – when ducks are found the new owner can add them to the map. I may have got just a little bit obsessive about checking that my ducklings have found a safe new home…