Spinning on a small scale

I recently acquired a flick carder.  I have now got a pretty good selection of tools – hand carders, drum carder and mini combs.  I bought a Jacob fleece last year and have washed and combed some of it.  I looked at again and managed to wash and dry some more locks (which with the summer we’re having so far this year is quite an achievement)!

I am not particularly good at washing fleece, but there were some white locks which managed to survive my processing attempts without turning into a mangled mess.  I had planned to comb them to spin a skein for the local spinning show (it will probably be my only entry this year – so many plans that have fallen by the wayside over the last year).  Instead,  I tried out my new flick carder.  I found that bravery and a firm hand was the key to success and ended up with a small bag of fluffy white fibre (and plenty of waste and vegetation).

I am aiming to spin a very fine yarn.  Earlier in the year I had worked on fine spinning on my Ladybug, but that is still set up with the bulky flyer for some art yarn experiment I started a while ago, so I went back to basics with my tiny little turkish spindle: 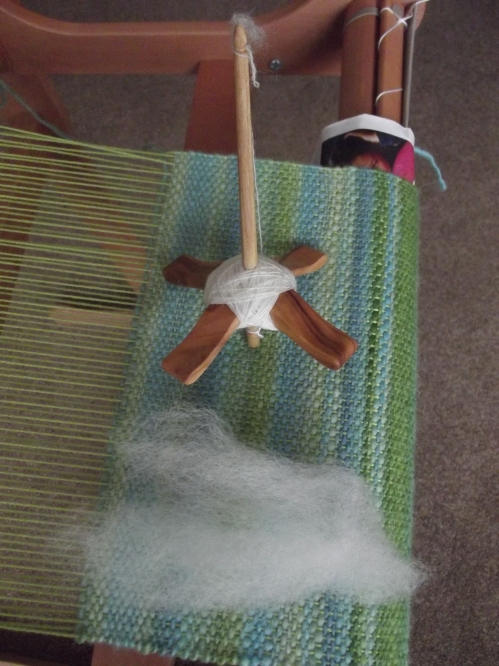 It’s a long time since I used a spindle, but it came back to me.  The tiny spindle is great for getting a fine yarn – it just keeps spinning and spinning.  I’m not quite sure how I will go about plying from two balls of singles yet, but I’ll worry about that another day!

5 responses to “Spinning on a small scale”